There’s an old Wall Street adage that investors should “Sell in May, and Go Away,” the rationale being that markets tend to “cool down” over the hot summer months resulting in historically weaker performance during the period of May – October. According to Fidelity Investments, the anomaly has generally held true for the S&P 500 since 1990, showing an average return of about 2% for the May to October period, versus about a 7% return for the other months the in year.

However, if the first seven months of this year are indicative of the remainder, 2022 is shaping up to be a year in which the analog might be proved wrong. From January to April the S&P 500 fell 13.3% as investors shed stocks amid concerns over tightening monetary policy, rising inflation, and the Russian invasion of Ukraine. April, on average the second-best performing month at +1.4%, was especially painful with the index falling 8.8%, its worst showing in over 50 years. The market went on to fall another 11% over the next month and a half before bottoming out on June 16th.

By mid-June energy prices were soaring, taking the CPI above 9%. The 10-year Treasury was at 3.3% and the Fed had just announced its first 0.75% interest rate hike. Many economists were predicting that the Fed would have to become even more aggressive in its efforts to tamp down inflation, introducing broader recessionary pressures. At the time, any investor who adhered to the “Sell in May” philosophy likely would have thought themselves astute for having avoided the additional 11% loss. 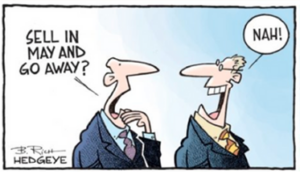 But as is so often the case when sentiment is at its worst, the market then turned higher. Through the close of business on Tuesday 8/9 the S&P 500 has rallied 12.6% from the June low. The 10-year Treasury is back below 2.80%, energy prices have dropped sharply, and the recent strong jobs report should alleviate near-term recession fears. Additionally, the inflation report released Wednesday 8/10 showed that the Consumer Price Index, while still uncomfortably high, decelerated to 8.5% in July.

While market maxims like Sell in May have generally held true historically, any attempt to exploit them each year may not yield similar results. In any given April, the market doesn’t care if the 50 previous Aprils showed positive returns on average, or that October tends to be the worst performing month of the year. The market is forward-looking, and when things appear to be at their worst, it often begins to price in better conditions ahead.

The most recent data suggests that peak inflation may be behind us, and as a result, Treasuries are now pricing in a less aggressive Fed. While steering clear of calling the June low the ultimate bottom for the year, we are cautiously optimistic that the worst is behind us.