Market Commentary: February 2021 – Investing vs. Gambling: A Comparison of Today’s Market to the 2000 Tech Bubble

Market Commentary: Investing vs. Gambling: A Comparison of Today’s Market to the 2000 Tech Bubble

There’s a mania that has taken over the investment world since the onset of the pandemic. Retail investors have become more aggressive and there seems to be enough crowd psychology at work that their bets can become market moving events. That has led some to openly wonder if today’s market is developing into Tech Bubble 2.0. While we have concerns over the hysteria we see in some corners of the market, we do not believe the conditions we see today rival what we saw in 1999-2000.
At the beginning of the new millennium the number of garbage companies that were able to float initial public offerings (“IPOs”) was alarming. Some may remember one in particular called NetJ.com. It filed for an IPO even though it didn’t have assets or a business plan. Here’s a quote from their 1999 prospectus:

“The company is not currently engaged in any substantial activity and has no plans to engage in such activities in the foreseeable future.”

Despite this bold admission, the firm was still able to raise $110 million from investors who had oversubscribed the offering. In the days after the IPO, NetJ’s stock price shot up over 1000%. Early investors who sold were ecstatic. The remaining shareholders had to lick their wounds after the company went bankrupt in 2000.

As shown in the chart below, a level of frenzy existed in 1999-2000 that outpaces anything we’re seeing today. IPO returns during the Tech Bubble were twice as high as those we’ve seen over the most recent two years, and there were more flaky stocks like NetJ.com. Today’s crop of IPO candidates come from venture capital firms that provide financing for young companies and guide them in the development of their business. This financial backing has allowed these firms to become more seasoned before launching IPOs. For example, Uber was founded in 2009 but didn’t go public until 2019. The average age of companies going public at the time of the Tech Bubble was 5-6 years, which doubled to an average of 10 years as of 2019-2020. In addition, less than 30% of IPO firms had sales in excess of $50 million (inflation adjusted dollars) during the Tech Bubble. IPO firms in recent years have shown much stronger sales. 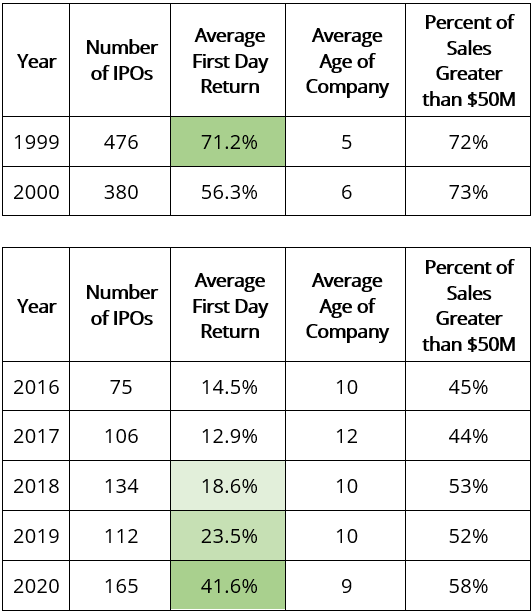 With the Tech Bubble in the rearview mirror, what do we make of today’s market action? First, we acknowledge that retail investors are having an outsized impact on market prices relative to their size. There is a herd mentality that moves these investors into similar positions at roughly the same time, and this is probably being facilitated by social media.[1]

Another contributing factor is the broad move toward index investing. Some believe this may be giving smaller retail investors a bigger role to play in “price discovery.” Price Discovery is the process of determining the value of a stock through the interaction of buyers and sellers. Index investors are indifferent to the price of individual stocks. Thus, the retail investor’s trade, despite its small size, is more meaningful in that it reflects their view of a stock at a given price.

That leads us to the current frenzy we’re seeing in some corners of the market. Special purpose acquisition companies (“SPACs”) are increasingly being used by companies to bypass the heavily regulated traditional IPO process to gain a public listing. For example, DraftKings was taken public via a SPAC and quickly produced returns over 400%, capturing the attention of many and pushing even more financial firms to launch new SPACs (chart below). Investors have also rushed to gamble on heavily shorted stocks like GameStop and AMC Entertainment in hopes that technical factors produce large short-term swing trades. 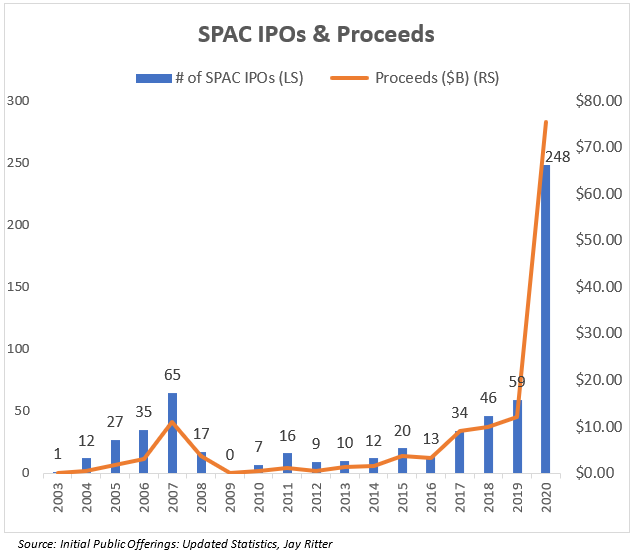 While there may not be a “stock market bubble”, there are bubbles in certain stocks. Typically, a clear indication of a bubble is a sudden rapid increase in price. In an efficient market, that doesn’t happen. Fundamentals do not change at the pace which justifies these sharp stock price increases.

Bubbles last much longer than most people expect. This boosts the hopes of the gullible and defies the skeptics. As economist John Maynard Keynes once quipped, “the markets can remain irrational longer than you can remain solvent.” That makes it hard to bet against stocks like GameStop or other companies that have seen huge price spikes. It remains important to recognize that these are more akin to gambling at a casino than sound investments.

At the start of a downturn, the economic environment doesn’t feel much different. The economy is marching on, but with less intensity. At an economic trough, improvements to the economy can be hard to appreciate – especially given the typically widespread economic difficulties still being experienced by large portions of the population. So, at an economic trough when national output is starting to increase, it can still feel challenging, and that’s where we are now. While it’s hard to fight the shortsightedness when we’re in the trenches, it’s important to look to the horizon to see that better days are ahead.