Growing up, purchasing our first color TV seemed like a gigantic leap forward – even with manual adjustments to the bunny ears, no remote, and the fact that most of the programming was limited to the big three national broadcasters and an unaffiliated local station. In the following decades, the subsequent growth of cable and interest-specific channels like home improvement and cooking eventually weakened the franchises of national broadcasters while increasing the amount of available production content.

However, nothing changed the media landscape like the arrival of the internet age. Television alternatives started taking off and streaming video on demand (“SVOD”) quickly gained traction with consumers. In the past, distribution was largely controlled by the major broadcasters and cable companies, but now distributors include streaming platforms like YouTube, Netflix, Roku, Apple+, Amazon Prime and others. Some companies have attempted to vertically integrate using a strategy to control both distribution (whether TV or data package) and the content. AT&T bought Time Warner and its cable assets including CNN, HBO, Food Network, etc. Comcast bought NBC/Universal Studios. Verizon, going a slightly different route, bought internet pioneer AOL and Yahoo. However, these institutions, which operated capital-intensive, debt-laden businesses, found that their new acquisitions did not necessarily complement their core enterprises. While Comcast was successful in integrating NBC/Universal into its organization, the same was not true for AT&T and Verizon.

The onset of the pandemic acted as a catalyst in accelerating existing trends. It also prompted movie studios unable to screen their productions in theaters to launch their films on streaming platforms to generate revenue. Content producers came to realize just how profitable these streaming apps can be.

As SVOD adoption accelerated, so did the demand for media assets. As the chart below illustrates, the cost of developing original content is enormous. To get in the game, you need to spend billions a year on content. That was a challenge for legacy telecom companies. 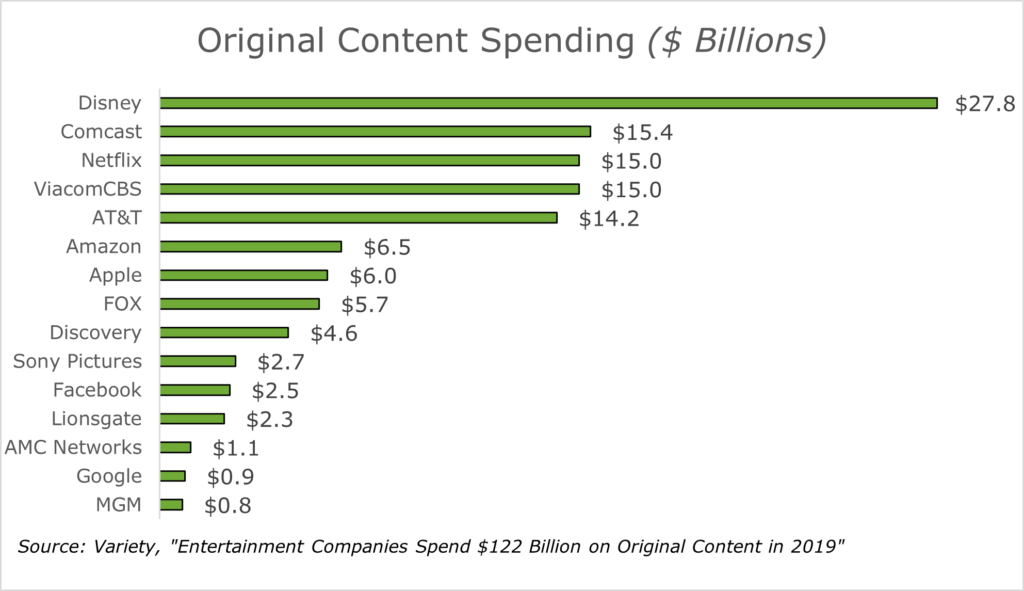 Telecom executives had hoped video programming could be complementary to owning the infrastructure that delivered the programming. That dream was short lived, and AT&T announced last month it would divest Warner Media. By contrast, technology companies have found that owning media supported their business models by keeping users in the “eco-systems.”

Amazon, whose cash hoard sits at $73 billion, is spending $8.45 billion to acquire MGM. Even considering that they may have overpaid, it’s still only a drop in the bucket for the e-commerce giant. When Amazon Prime first launched people became members to get free shipping. The video content was viewed as a nice perk. Now, Amazon’s management sees video content as a driver of Prime membership growth and lower membership turnover. In addition, keeping subscribers engaged helps them stay in the Amazon ecosystem which increases the value of everything from online advertising to online sales.

Depth of content is important – Netflix alone hosts a catalog of 2,000 TV shows and 4,000 movies. Back in 2011 when Amazon launched Prime Video, they had a limited video library which made it hard to keep viewers engaged. Now, Amazon boasts more than 13,000 movies and over 2,200 TV shows. The purchase of MGM just compounds that strength with access to franchises like James Bond, Pink Panther, and Rocky. It continues to enhance Amazon’s competitive advantage and likely helps provide it with incremental revenue growth. It would not be surprising if Amazon increases its Prime membership fees after the MGM deal closes. With this addition, we estimate the value of Amazon’s web presence (excluding AWS) at $1.1 trillion. By contrast, the value of AT&T’s entire enterprise is $390 billion.

We expect that other tech companies are likely to enter the fray as well. For example, SVOD probably makes sense for Facebook given its existing video trove. However, with fewer potential partners available, they are faced with a steeper adoption curve. It is clear SVOD demand is here to stay and as technology firms continue to invest it may lead to further consolidation in the media industry.