June is NBA Finals season, and the market, echoing the moves of many of the skillful players on these basketball teams, has just given investors a giant head fake. Through last week the market had rallied almost 10% from the lows reached back on May 20, giving investors some respite from an exceedingly difficult trading environment year-to-date. Some of this was driven by a reversal of overly bearish sentiment, but much of the bounce was driven by the prospect that the worst of the inflation numbers were possibly in the rear-view mirror. After all, April’s inflation report showed slight deceleration year over year and many commodities like industrial metals and agricultural products were coming off the boil.

However, this rally completely unwound in a matter of three short days as May’s inflation numbers reported last Friday seems to have reversed any signs of near-term hope that consumer prices are headed in the right direction. Headline inflation re-accelerated to 8.6% from April’s 8.3%. Core inflation, excluding food and 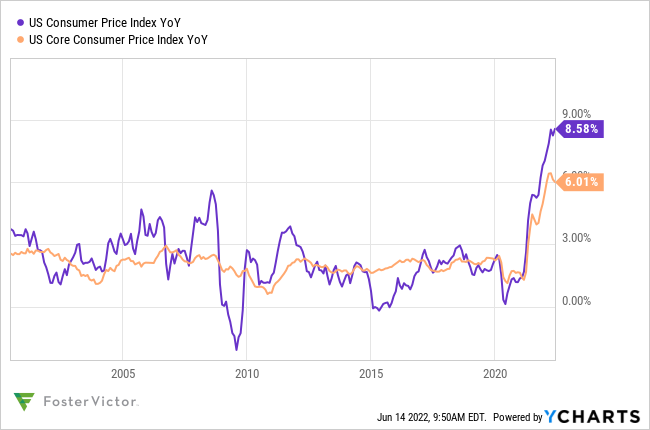 energy, did show some continued deceleration to 6% from 6.2% – but excluding food and energy is of little consolation when consumers face sticker shock at the pump and grocery store every week. In fact, the food at home index was up 11.9% year over year which was the fastest growth since April of 1979, and the gasoline index was up 106% which was the largest 12 month increase on record dating back to 1935.

What this means is that the Fed still has a lot of wood to chop. In fact, short term interest rates ticked markedly higher following the hot inflation report and the Fed just raised rates 75 bps, faster than their previously signaled 50 bps. They also just raised their estimate of the terminal Fed Funds rate markedly – signaling that they plan to be more aggressive in the future as well. Up until now, the Fed has likely been reluctant to move this fast for fear of “spooking the market,” but with the market now officially in bear market territory (down more than 20%) and sitting at its lows, Chairman Powell may feel he has nothing to lose in his quest to curb inflation.

With an increasingly aggressive Fed, this leads to the real angst in the market – the potential for slower growth going forward. How much will soaring prices and higher rates slow down economic activity? So far, the hard evidence points to solid demand, spending, and earnings. As I write this, Oracle just released their most recent quarterly report with better-than-expected revenues and earnings citing strong demand in their cloud business. While companies are saying they clearly have a cost problem, most companies are not saying they have a demand problem.

More precisely, companies do not have a demand problem yet. Pushing harder on interest rates could begin to slow down demand. In addition, the old saying, “the cure for high prices is…high prices,” means that consumers might finally cry “uncle” and refuse (or not be able) to keep spending. Consumer revolving credit balances are already up sharply off post-Covid lows, indicating that stimulus cash and savings may already be close to tapped. Anecdotally, there are some reports of cautiousness in the semiconductor space and many retailers are struggling with either too much or the wrong type of inventory. Sometimes recessions can even be self-fulfilling prophecies – the more we turn on the news and see recession headlines splashed across the screen, the more corporate and consumer decision makers then decide to pull back out of caution.

The risks are certainly high and rising, but a recession is certainly not fait accompli as there are still many positives to help counterbalance. Unlike in past recessions, corporate balance sheets are in excellent shape. Money market assets are still about $2 trillion above pre-pandemic averages – there is plenty of cash on the sidelines. The employment picture is still robust: the unemployment rate is historically low and there is still an excess of jobs available. Interest rates at 3-4% are still not high by historical standards and there have been plenty of expansions at similar or higher rates. Finally, a lot of damage has already been done in the stock market, leaving overall valuation levels attractive if earnings are able to hold.

We’ve been dealt a string of bad hands and it feels like the “casino” has been taking some of our winnings. How do we turn the tables to get the advantage back? There are two ways to do this: by not trying to time the market and by investing for the long-term. 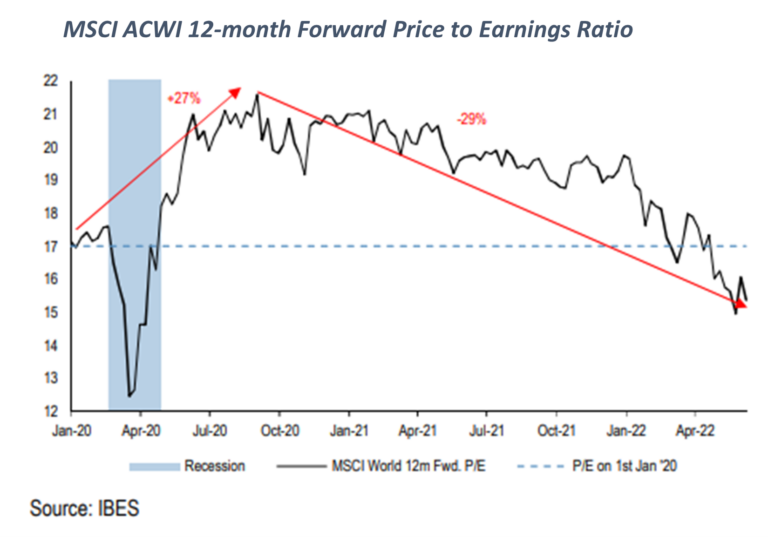 While the near-term future may certainly be cloudy, at times like this it is important to remember to stick to your financial plan knowing that money invested in the stock market has a long-term time horizon – and the long-term history of the stock market is on the investor’s side. It is easy to be head-faked by the headlines in this kind of environment, but the key is to keep your eye on the ball, stick to your discipline, and not be fooled by every short-term move of the market.

Notes on the News: Series I Bonds

Inflation-adjusted Savings Bonds (Series I) are 30-year bonds with an interest rate that adjusts every six months based on the Consumer Price Index (CPI). Like other U.S. Savings Bonds, they are as close to a “risk free” investment as you can get because they are 100% backed by the U.S. government. Series I Bonds come with zero principal risk (they don’t lose value) and earn monthly interest based on two components – a fixed interest rate determined at the time of purchase, and a variable interest rate that changes every six months based on the level of CPI. Interest is added to the bond each month and is paid out at maturity (30 years) or on redemption if redeemed early.

From May – October 2022, the composite interest rate is 9.62%, but this can and will fluctuate over time.  Historically, rates have been much lower.

I Bonds can be an attractive option for investors in periods of rising inflation, but they do come with some restrictions. There is a $10,000 purchase limit per person or entity per year, meaning each year you could buy $10,000 for yourself, your spouse, each child, and your business if applicable. I Bonds cannot be redeemed for at least 1 year, and 3 months of interest is forfeited if the bonds are redeemed within the first 5 years. After 5 years there is no penalty. As these are government issued bonds, the interest is subject only to federal taxation – I Bond interest is state and local tax-free. All transactions take place through the US Treasury website (treasurydirect.gov).