Each time the economy faces a downturn, lawmakers have to grapple with how to handle it, and this time Congress has responded to the ongoing pandemic driven recession with the American Rescue Plan Act of 2021. Last week, President Biden signed the $1.9 trillion stimulus package. So what can we expect?

Fiscal Multipliers
Counter cyclical measures available to offset impacts of an economic downturn are surprisingly limited. Government can stimulate an economy using tax cuts, income transfers, or with direct spending. However, not every government stimulus dollar spent has the same economic impact. Certain activities will generate more than $1.00 of economic growth and some will generate less. Economists calls these fiscal multipliers due to the range of effects they have on the economy.

The range of anticipated impact from fiscal stimulus is shown by the low and high estimates in the table above, and the actual impact of stimulus is influenced by different variables. One such variable is the degree to which a targeted area needs stimulus. For example, the unemployment rate is 16% in the Leisure & Hospitality industry but only 3% for the Financial Services industry. In terms of stimulus impact, increased spending on Leisure & Hospitality should have a greater chance of engaging underutilized resources than spending on Financial Services. Second, if income transfers go to individuals or organizations that are unlikely to spend the capital, then the stimulus impact will be limited. The stimulus package provides for $1,400 stimulus checks to Americans with incomes under $75,000. Qualifying individuals with incomes at the high end of the range will be less likely to spend the funds than people with lower incomes and this becomes a limiting factor for this component of the stimulus plan. Of those who do spend their stimulus dollars, some of these funds will be spent on imported goods, limiting the number of dollars that make it back into the US economy.

Looking back at the 2009 American Recovery & Restoration Act (ARRA) helps provide some context for the current stimulus. ARRA amounted to $840 billion in stimulus (roughly $1 trillion adjusted for inflation) with 22% hitting in 2009 and 50% the following year. An uncomfortable truth is that stimulus spending doesn’t always hit the same year as legislation is passed. This means the $1.9 trillion in government stimulus from the American Rescue Plan Act will not fully benefit the economy in 2021. Still, the size of the stimulus program has been enough to help push up economic forecasts. Over the last two months, consensus estimates for 2021 GDP growth increased from 3.9% to 5.0% and 2022 GDP growth from 3.1% to 3.7%. 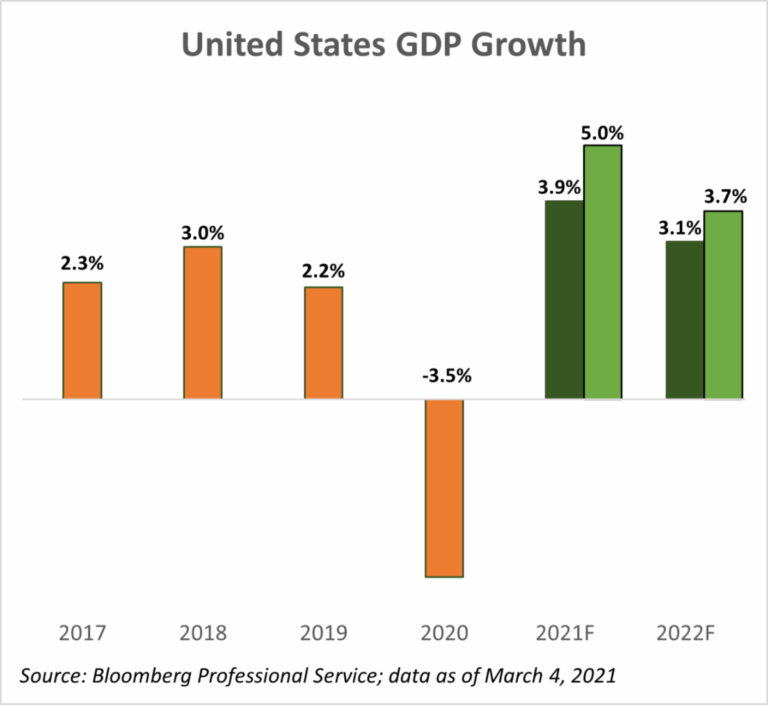 Keep in mind that the environment in which the stimulus is being provided is improving. The current recession is not a typical one resulting from a downturn in the business cycle, but rather due to lockdowns aimed at limiting the spread of COVID-19. While the first coronavirus stimulus package was necessary, it wasn’t able to have as large an impact on the economy as President Obama’s stimulus on a dollar-for-dollar basis due to a cessation of many economic activities for health reasons. With vaccines increasingly reducing the spread of the virus, we may find ourselves in a situation where stimulative capital is able to have a larger economic impact than recently thought.

Crowding Out
The massive increase in government bond issuance raises the specter of higher interest rates. Interest rates bottomed when the 10-year Treasury yield hit the ultra-low level of 0.52% on August 4, 2020. Since then, its yield has climbed to a recent high of 1.6%. The expected flood of Treasury bonds needed to finance stimulus spending is undoubtedly contributing to the rise in yields. Because government bond yields form a baseline for the pricing of other credit instruments, a rise in yields have consequences for everyone from home buyers to corporate borrowers. This puts pressure on the cost of financing private future investments and will, at the margin, dampen growth in private spending.

Estimated Impact
Noting the above we believe that the stimulus plan will likely provide a GDP boost in the range of 0.6% to 3.9% with the impact higher than the recent 1.1% increase currently baked into consensus economic forecasts. While the short-term stimulus may be welcome relief after a year of COVID-19 shutdowns, the higher debt burden is expected to slow economic growth in future years. In the meantime, 2021 is shaping up to be great year for economic growth, especially when compared against 2020.