Market Commentary: May 2021 – The Move to Cyclical Stocks

For a second year in a row, the stock market has produced strong returns for investors. Through April, the S&P 500 is up nearly 12% versus an average gain of 4.3% through the first four months of the year. The receding coronavirus pandemic combined with a huge dose of Federal stimulus dollars should result in above-trend economic growth this year and next. The result has been a change in market leadership. Big tech and technology companies in general led the markets in 2020, but this year has seen a shift to cyclical stocks.

There’s an old Wall Street saying, “No tree grows to the sky,” meaning that there are limits to which the market can move before it becomes detached from economic realities. Stock values are typically cited in terms of the multiple put on earnings or cash flow. Market multiples moved higher last year, with some of this explained by a fall in interest rates. That left market valuations at a level where the bias was for lower, not higher market multiples. This is particularly true of the big technology companies, Apple, Amazon, Microsoft, Alphabet and Facebook. Their multiples have tailed off slightly over the last four weeks and that is pressuring market returns, at least in the short run, due to their large combined weight in major market indices.

It is important to remember that these companies all benefit from a shift to the digital economy, which the pandemic accelerated. From our perspective, earnings fundamentals remain in place. However, tech is no longer leading the market. In April, Real Estate was the top performing sector because it benefits from the reopening of the economy. In fact, many of the market leaders this year have been industries that experience significant earnings gains in economic recoveries. For example, oil and gas producers are not only benefitting from a rise in crude oil prices, they also benefit from a significant increase in volumes. Financial Services benefit from both a rise in interest rates and an increase in loan demand. Both the oil & gas and financial services industries enjoy the benefit of rising margins, so earnings end up increasing even faster than sales. The same is true for many of the other cyclical industries below. By contrast, tech-like companies are not keeping pace. 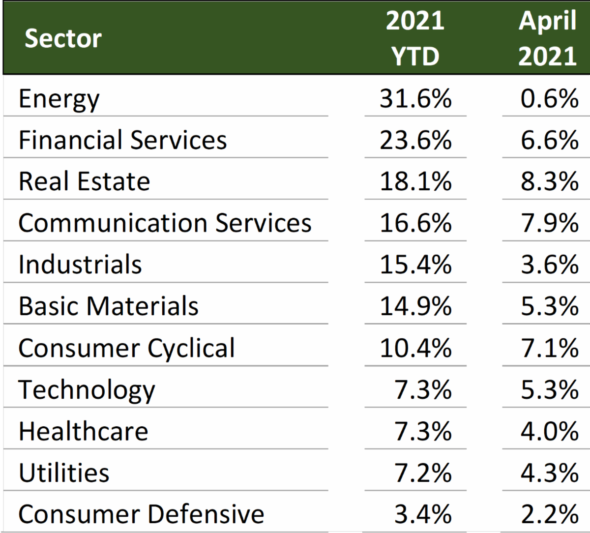 This does not mean that tech has lost its overall appeal. What we hear from management teams confirms our view that these companies can continue to produce the earnings growth that justifies their valuations. Right now, Wall Street appears more concerned about “sector rotation” – that is, being in cyclical sectors that are experiencing that rapid increase in earnings growth. However, those rotation bets are hard to get right, and cyclical industries tend to experience maximum earnings acceleration when an economy initially recovers. After that, earnings growth moderates leaving those focused on sector rotation strategies looking for the next shift. As companies report their results, we expect that earnings growth will prove tech’s continued value.