Market Commentary: Tarrifs may not be so tarrif-ic

Tarrifs may not be so tarrif-ic

The United States and China have a far longer trade history than many realize. Many forget that the cargo dumped into Boston Harbor during the Boston Tea Party was Chinese tea. Following the revolutionary war, this country’s first official trade with China came via the Empress of China which, in 1783, transported new US trade officials to meet with members of the Qing Empire. In addition to emissaries, the ship also carried a cargo of Mexican silver, liquor, and American Ginseng. Trade with the Chinese made the ship’s owners very wealthy.

US-China trade worked well in those early days. China’s mercantilist approach to commerce suited American traders. Unfortunately, trade took a big step backwards after the communist takeover in 1949. Chinese institutions became inefficient as the government forced central planning onto their economy. However, the reforms of 1978 saw the Chinese economy start to modernize. In the 1980s the Chinese government instituted a policy of “Trade-Technology-for-Market” or what we commonly refer to as “forced technology transfers.” If foreign businesses wanted to access the Chinese market, they had to share their technology with a Chinese partner. Despite this requirement, foreign firms saw great potential and invested. This contributed to China’s transformation from an agrarian economy to a modern industrial one. By 2013, China had surpassed the US as the largest trading nation in the world. This brings us to the present day: China has a huge trade surplus with the United States and the current US President is taking exception. His preferred method of dealing with the Chinese imports has been to impose tariffs. However, tariffs may not be having the expected effect.

Academics often talk about the law of “unintended consequences” when it comes to economic policy. Sometimes actions have outcomes the political class did not expect. Import tariffs exemplify this. Tariffs are intended to increase costs to foreign companies thereby helping US based firms gain a competitive advantage. The mainstream opinion is that the “unintended consequences” of Chinese tariffs will increase costs and hurt American consumers. However, there is a bigger issue that is being overlooked.

Dartmouth Professor Douglas Irwin published a monograph on trade many years ago.[1] He notes that tariffs have the double effect of reducing imports into the United States while also curtailing exports of US goods into the country targeted by our tariffs. Professor Irwin concedes that tariffs are generally effective at reducing demand for a foreign country’s goods – as policy intended. However, lower demand for a country’s goods is also accompanied by lower demand for their currency. If we’re purchasing less of their goods, we have less need for their currency. This leads to a fall in that currency’s value relative to the US dollar and results in a decline in US exports due to fall in foreign purchasing power.

Has Professor Irwin’s position held true in our recent experience with both China and Mexico? Yes! President Trump’s initial application of tariffs to Chinese goods resulted in the value of Chinese yuan falling six percent. Last month, he extended tariffs on additional Chinese goods resulting in another three percent decline. Likewise, the president’s threat of a five percent tariff on Mexican goods resulted in the peso falling nearly one percent over a short period of time. 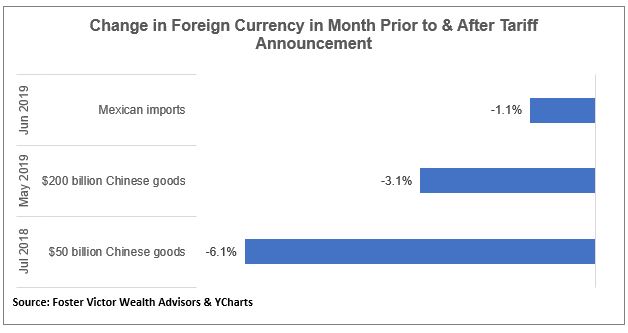 What has been the fallout from a fall in the value of the Chinese yuan? China’s reduced purchasing power resulted in lower demand for US goods. Since the announcement of the first Chinese tariffs, US imports of Chinese goods have fallen 15% – an intended policy outcome. However, the unintended consequence has been a 26% fall in US exports to China over this same period. 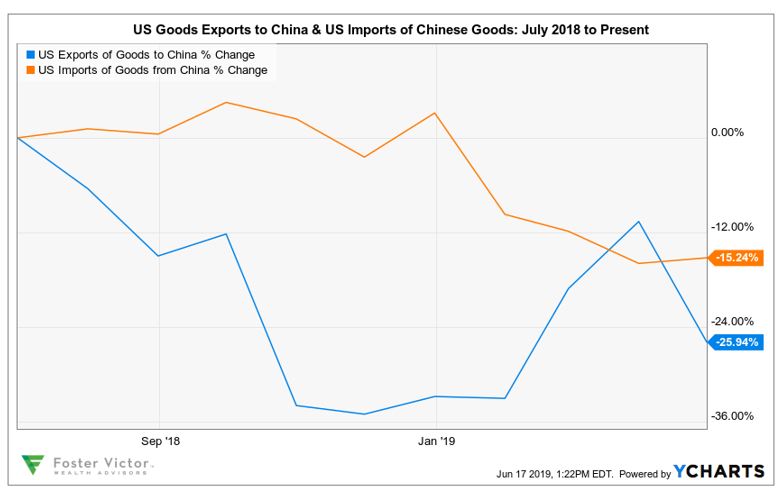 Tariffs have an innate appeal to policy makers as they allow them to levy a tax without angering voters since the tax is paid by foreigners doing business in the United States. Presidents from both major US political parties have levied import tariffs over the years. President Obama applied punitive tariffs to Chinese tires. Both President G.W. Bush and President Clinton applied tariffs to imported steel. Unfortunately, tariffs don’t work as advertised. As the Rolling Stones once sang, “You can’t always get what you want.”