Reflections from our Bookshelf: Lone Survivor

Lone Survivor: The Eyewitness Account of Operation Redwing and the Lost Heroes of SEAL Team 10 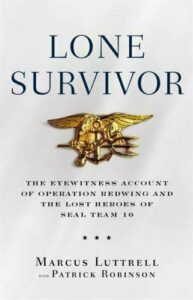 I read Lone Survivor because I enjoy reading non-fiction books about our military. The battles and bravery displayed by these men and women is incredible and to read about live accounts of covert missions, spy craft, and battles just seems surreal. It’s important that these stories are told so that we honor the memories of our soldiers. The current situation in Ukraine was on my mind while reading this book. It made me even more grateful to be an American. I am so lucky to have been born here and I hope I never take that for granted.

Lone Survivor is written by former Navy SEAL Marcus Luttrell. It is a story about the ultimate sacrifice three soldiers made giving their lives fighting for our country. Marcus Luttrell was the only survivor of a battle that took place in the Kunar Province of Afghanistan while Operation Red Wing was in full force.

Operation Red Wing was a joint military operation conducted in 2005 intended to disrupt the activities of local Taliban anti-coalition militias that were contributing to instability in the area. A small group led by a local tribal leader, Ahmad Shah, was instigating chaos to prevent any progress being made in the region. Consequently, Shah and his group were one of the primary targets of the American military operation.

A team of four Navy SEALs – Marcus Luttrell, Michael Murphy, Danny Dietz, and Matthew “Axe” Axelrod were tasked for surveillance and reconnaissance of Shah and his men. The SEAL team was ambushed, and a fierce battle ensued between the four men and dozens of Afghan Taliban fighters. Eventually, cornered, with Danny and Axe already wounded, the four men had nowhere to go but down a mountain.

The men were forced to throw themselves down the dangerous cliffs with no time to safely scale the mountainside. They paused to fight the Taliban between each attempt to escape, but they were eventually overwhelmed. Tragically, Danny, Michael and Axe were all killed in action, each of them exhibiting unbelievable bravery and sacrifice to help each other. Marcus eventually escaped. A local villager took him into their home to nurse him back to health. It is tradition in this Afghan tribe that a guest of any villager will receive full protection from the entire village. When Shah and his men discovered Marcus at the village they attacked, but the entire village fought back to honor their tradition and protect Marcus. American forces arrived shortly after, beat back the Taliban, and brought Marcus to safety.

The book details a moment when Michael Murphy demonstrated the truest form of bravery and sacrifice. The SEALs were pinned down and needed to call for backup but didn’t have enough radio signal on the side of the mountain. Murphy realized that for the signal to go through he needed to call from a highpoint, but it wouldn’t allow for any cover from gunfire. He knew that this meant certain death but didn’t hesitate – he was able to radio out successfully but in the process was shot multiple times and died. His act of incredible selflessness put me in awe and I had to catch my breath. What an amazing act of bravery.

How will this book change my habits or influence me?

This book has influenced me to complain less about the small or silly things in life that really don’t matter. I’m so blessed by the life I have. It has also encouraged me to do more selfless acts of service for others and I’m going to try to implement this more often.

Add this to your reading list…because the book is very engaging and easy to read. It is a true page-turner, especially, if you enjoy books about war and battles.