Reflections from our Bookshelf: The Ride of a Lifetime

The Ride of a Lifetime: Lessons Learned from 15 Years as CEO of the Walt Disney Company 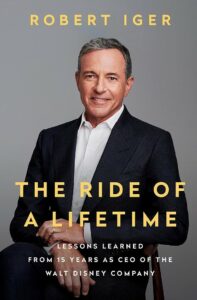 I grew up on Disney and have always been fascinated about how what started as an animation studio has grown into an organization that encompasses movies, television, merchandise, theme parks/resorts and more. Robert Iger has been at the helm of the Walt Disney Company through some of its biggest expansions, including opening several new parks, acquiring Pixar and 21st Century Fox, launching a streaming service and assuming control of Marvel and Star Wars intellectual property.

While it is not a traditional memoir, the book loosely follows Iger’s career from a menial labor position on an ABC television set to being named CEO and Chairman of The Walt Disney Corporation. The primary focus is on the lessons he learned in various roles on the way to the top, and how he transitions from the Learning to Leading phase of his career. He also shares background stories behind some of the biggest deals in the past 20 years.

At the beginning of the book, Iger states his ten principles that he believes necessary to true leadership. One of the most poignant ones for me was “the relentless pursuit of perfection.” Iger was clear to note that that doesn’t mean perfectionism no matter the cost, but a refusal to make an excuse that something is good enough. You can see this principle woven throughout the book when Iger pushes his team to continuously innovate – whether that’s launching new technology to keep up with modern times or acquiring intellectual property to continue to create television shows and movies. He also notes that you shouldn’t create just to create, but if you believe something can be improved, put the effort in to making something great.

How will this book change my habits or influence me?

Most of us have read leadership books, but reading about the core principles that a highly successful CEO stands by definitely causes me to evaluate my leadership style and the core values that I hold in making decisions. A key value in all his stories was respect for the other individual – whether that’s an employee, a superior or someone on the other side of the table. I want to strive to show that respect for another person whether it’s through words or the work that I’m producing.

You want to do a quick evaluation of your leadership values, but you also want some insider knowledge of the goings-on at The Walt Disney Company.