Reflections from our Bookshelf: When Genius Failed

When Genius Failed: The Rise and Fall of Long Term Capital Management 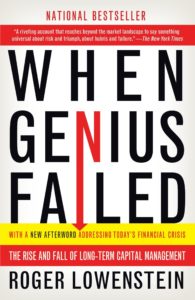 When Genius Failed is the story of a pioneering firm that thought it had the inside track on the market, only to quickly find that the capital markets don’t always function the way models suggest they should. I was interested in understanding more about Long Term Capital Management’s failure and how their arrogance led famed academics to conclude that their investment strategies were so sound that failure was a virtual impossibility.

Long Term Capital Management (LTCM) was a pioneer Wall Street “quant” firm. It was the first to hire PhDs from Ivy League schools. It also brought on Nobel Prize winning economists Robert Merton (MIT) and Myron Scholes (Stanford) as principals. The firm had an air of invincibility which encouraged bankers to provide it with cheap financing. This allowed the firm to leverage its bets 50-to-1. Fat returns appeared to validate their claim of intelligent enlightenment. Unfortunately, they had two things working against them: (1) a blind devotion to academic models that pointed to a negligible possibility of loss – the capital markets just aren’t that simple; and (2) a massive amount of leverage which left them vulnerable if losses ate into their limited equity capital. This created a perfect storm in 1998. LTCM held a significant position in Russian government bonds, and when the Russian government defaulted on their debt, it resulted in large losses even as LTCM’s models suggested they should be investing. In the end, a Federal Reserve mediated rescue prevented LTCM’s failure from infecting and possibly destroying other financial institutions.

I found it amazing that a company employing the best and brightest minds could have so much tunnel vision when it came to their internal financial strategies. The problem with the markets, as we saw as recently as the market panic in March, is that human emotion plays an important role. That doesn’t parlay into academic models. If there’s a panic, it doesn’t matter what your model says a security is worth.

How will this book change my habits/influence me?
In my opinion, pride played a role in LTCM’s demise. Like Icarus, who flew too close to the sun, those running LTCM acted as if their strategies were invincible. That ultimately led to their downfall. When investing money, a dose of humility is in order.

If you enjoy reading about the history of the financial markets, you’ll enjoy this book. The author draws from original documents and is able to paint a vivid, albeit disappointing, picture of individuals who thought they were untouchable.