In Charles Dickens’ classic “A Christmas Carol,” the tight-fisted and self-centered Ebenezer Scrooge is visited on Christmas Eve by a series of ghosts that help him to realize the error of his bah-humbug ways. Mr. Scrooge wakes up Christmas morning a completely changed man, showering his friends and family with generosity and cheer. A similar transformation happened on November 30th of this year when the ghosts of inflation past visited Jerome Powell, who woke up the next morning a changed banker. In testimony to the Senate on December 1st Chairman Powell noted that inflation was no longer “transitory” and that the Federal Reserve may accelerate their Quantitative Easing tapering efforts to “use our tools to make sure that this high inflation does not become entrenched.” This is code for rate hikes coming sooner rather than later.

Keep in mind that the Federal Reserve has a dual mandate – full employment and stability of prices (i.e., fighting inflation). Until their recent statements, Powell and the Fed had openly stated that they were more concerned about the first mandate, focusing on healing the labor market after the Covid-induced economic shutdown and letting inflation run hot. To his credit, and in the face of persistent inflation pressures, Powell has clearly shifted his stance and the market is now expecting an accelerated pace of monetary tightening over the coming years, with rate hikes now expected to begin by mid-year 2022. 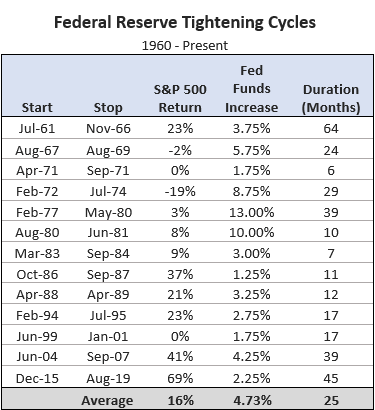 Now that the wheels of the tightening cycle have been set in motion, investors are asking what this may mean for the market. The knee-jerk reaction is to assume that a restrictive Fed and rising rates will have a negative impact on the stock market, but historically this has not been the case. In fact, it is quite the opposite. In the 13 Fed rate hike cycles since 1960, the market has returned an average of 16%, and was positive in 11 out of 13 occurrences, shown in this chart.

What about Quantitative Easing? Didn’t the market react negatively the last time the Fed started to pull back on their bond-buying program? Yes, it did – to the tune of a “whopping” 5.6% pullback when then-Chairman Bernanke surprised the market in May of 2013 with the first hints of tapering. However, from those lows in June 2013, the market went on to a 19% return through the end of that year. The initial 5.6% pullback in 2013 closely matches the selloff we already experienced this October after Powell first started publicly mentioning his tapering program.

This is not to say that a tighter Fed will not have ramifications for the market – we would argue that it already has. Low interest rates are a strong tailwind for so-called “long-duration” assets, meaning assets whose payoff is in the distant future. Many high growth companies fall into this cohort, particularly those with the ultra-trendy “lose money now, make money someday” business model. Those far-distant earnings make valuations extremely sensitive to small changes in interest rates (or discount rates). Low interest rates and liquidity-accelerated investor appetite drove many of these companies including Zoom, DocuSign, Peloton, Roku, and Teladoc to massive gains in 2020. This year, though, all these stocks are down anywhere from 40-70% as those interest rate sensitivities are now cutting both ways. Figure 1 shows the pullback off the highs for the ARK Innovation Fund ETF (ARKK) versus the broad market indices. This fund had become the cult-hero, poster-child advocate for this particular brand of company, managing $28 billion at its peak. As you can see, investors in this segment are already experiencing a “bear market.” 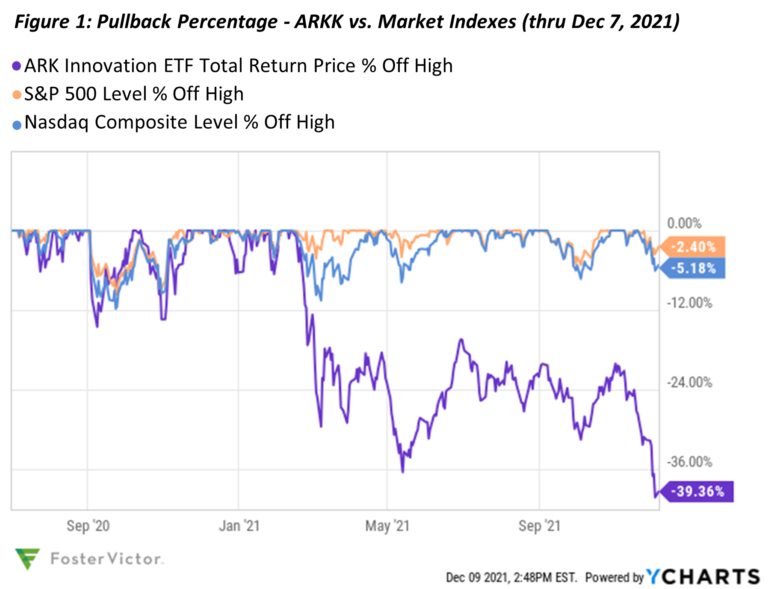 Moves in interest rates are important and we cannot ignore them. On top of other economic and valuation factors, most recessions have been sparked by Fed tightening cycles that have gotten long in the tooth. However, history shows that trying to time the market at the first hint of rate hikes can be a costly mistake, and that focusing on companies with strong, durable earnings streams can help keep investors from turning into market Scrooges.