Market Commentary: January 2022 – How the American “Worker” is Rapidly Changing

How the American “Worker” is Rapidly Changing

I first experienced the promise and fears of robotics and automation as a young boy through three Saturday morning cartoons. In the Felix the Cat cartoon of the 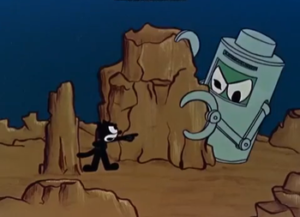 early 1960’s, the Master Cylinder appeared as a disembodied brain contained within a scary-looking electro-mechanical body. This antagonist was never helpful or friendly, even once threatening to end “wonderful-wonderful” Felix’s life with a can opener. In contrast, Gigantor, a space-aged robot operated by ten-year old boy Jimmy Sparks, was first developed as a weapon of war by Jimmy’s father but was later repurposed to serve as a guardian of peace.

Perhaps the most recognized and endearing of the cartoon robots was the Jetson’s intrepid maid and housekeeper, Rosie. Rosie was a friendly robot that performed household chores the Jetsons didn’t want to do, including dusting, vacuuming, and washing dishes. Despite her sometimes-acerbic Brooklyn attitude, Rosie offered this youngster a glimpse of the promise intelligent automation offered humans.
Today we may be entering a golden age of automation, an age full of the same excitement and emotion portrayed in cartoons some 50 years earlier. Automation can free humans from monotonous work and provide more time for value-added activities like product innovation and creative problem solving. The intimidating part of this is that increasing automation could come at the cost of worker displacement or, even worse, permanent job loss.

A recent study out of the University of Oxford suggested that 47% of U.S. jobs were at risk of being replaced by robots and artificial intelligence over the next two decades. Former President Barack Obama once opined that “the relentless pace of automation will make many good, middle-class jobs obsolete.” The McKinsey Global Institute projects that by 2030 roughly 15% of the global workforce will be displaced while another 8-9% of employees will work in areas that do not exist today.

However, automation may not be a job replacement story alone. Collaborative robots, or “cobots,” are designed to work side by side with humans. Cobots are often used to handle more tedious, repetitive, or dangerous tasks like screw-driving, palletizing and heavy equipment operation. Purdue University found that cobot deployment leads to greater job satisfaction among workers, while another study showed that teams of humans and robots working together outperformed both robot-only and human-only teams. This dynamic offers tremendous potential advantages for companies through increased productivity, lower costs, and improved quality. Furthermore, workers benefit from automation induced productivity gains though upskilling and new job growth as companies expand.

Despite concerns about jobs being lost to robots, the improvements that can be achieved through automation alongside human workers are encouraging. Safer, more satisfying work environments benefit employees’ overall quality of life. Productivity gains are important for companies and investors because they indicate more output per unit of input, driving up corporate profitability. With so many shifts in what “work” looks like over the past two years, we can only begin to imagine the possibilities of the future.