It wasn’t all that long ago that if you were an oil producer you had to pay a counterparty to purchase your supply. On April 20, 2020, oil was so plentiful that storage facilities worldwide were filled to the brim and the price for the US oil benchmark West Texas Intermediate (WTI) crude went negative for the first time in history.

Fast forward to today, and oil prices are near the highest levels since 2014 while crude oil stocks at the Cushing, Oklahoma storage facility have fallen to 26.4 million barrels as of October 29th – the lowest since 2018. JP Morgan recently noted that if nothing were to change in the Cushing balance over the next few months, we could be “effectively out of crude.” 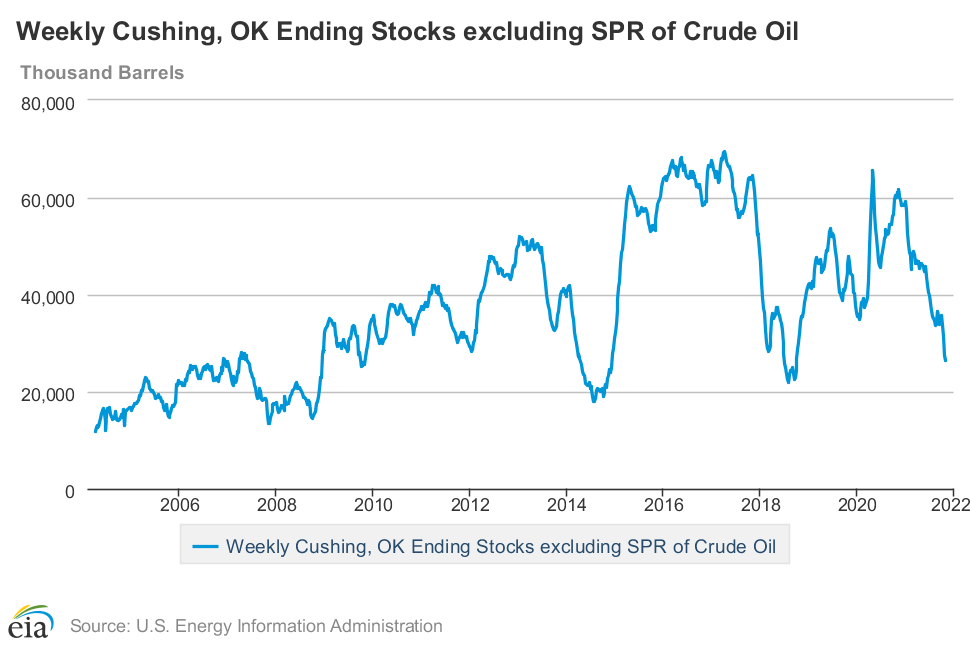 In fact, crude inventories around the world have fallen below the pre-pandemic 5-year average as demand has recovered more quickly than oil producers’ willingness to increase supply. Similarly, soaring global demand has pushed US natural gas futures to 12-year highs as prices at the Henry Hub recently topped $5.50 per million British thermal units (“BTUs”), up from $3 per million BTUs a year ago. Tankers carrying liquified natural gas (“LNG”) have moved record amounts of natural gas out of the US this year as demand in Europe and Asia exceeds supply. As of October 29th, natural gas in US underground storage is 8% lower than the same time last year and about 3% lower that the 5-year average. A severe winter in the United States could lead to domestic markets having to compete with hungry European and Asian buyers, driving prices even higher.

US coal has also seen a surge in demand, with almost all of production through the end of 2022 and into 2023 already sold. Prices are surging as well, with coal futures contracts for delivery in 2022 trading roughly 20% above current spot rates. Since coal’s principal use is to generate electricity, it competes with natural gas to supply electricity to many parts of the country. According to the Energy Information Administration (EIA), the US is set to burn 22% more coal than last year, the first annual increase since 2014.

Despite the recent surge in demand, coal consumption in the US has been in structural decline since 2005. Likewise, coal stockpiles have shrunk to 84 million tons, their lowest level since 2001. However, demand from other parts of the world is likely to remain strong in the coming years. China has been building new coal plants at a fast pace, and India relies on coal for 70% of its electricity generation. The recent surge in demand for coal may not be just a short-term hiccup in the transition to clean energy.

What does this mean for investors? Rising energy prices coupled with lingering supply chain shortages continue to put upward pressure on inflation. If these issues persist into 2022, both businesses and consumers are likely to bear the consequences, and that has implications for the broader economy. We continue to keep a watchful eye on these and other recent developments that can impact client portfolios.