As the saying goes, “streaks are made to be broken.” The second longest Jeopardy win streak was broken this year at 38 wins. The St. Louis Cardinals’ 17-game winning streak was broken this season – the 6th longest in baseball’s modern era. Even the Alabama Crimson Tide’s 100-game win streak against unranked opponents and Saban’s 24-game win streak against former assistants was broken when underdog Texas A&M toppled the reigning college football champs a few weeks ago.

With the S&P 500’s pullback in September and early October, the market ended its own streak of 227 days without a 5% pullback, which was the 11th longest run in history and marked almost a full year of consistent new highs. The list of factors attributed to this recent market weakness is long: September seasonality, higher interest rates, China real estate risks, supply chain bottlenecks, potential Fed policy pivots, inflation, and debt ceiling shenanigans.

As with all market worry narratives, it can be helpful to parse through each of them to see which are noisy headlines and which ones may have teeth. We would put market seasonality and rising interest rates squarely in the “noise” camp. That’s not to say weak September seasonality didn’t have some bite this time around, but it is not a consistent phenomenon, and historically, we are already through the worst of the calendar. While rising interest rates are not to be ignored, if they are increasing for the right reasons (better economic growth and modest inflation expectations) and at a pace that is tolerable, then the market should be able to absorb them – the market has handled rates at much higher levels than this through the years. 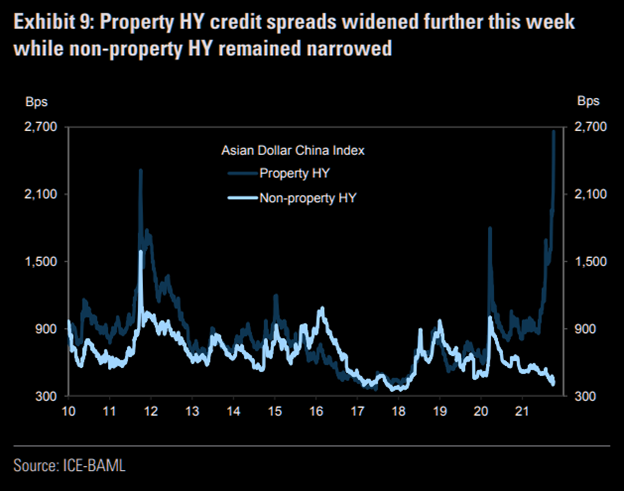 In the “moderate” worry category, the default of China Evergrande, China’s largest and most indebted property developer, continues to make headlines.  But we would note that so far, the fallout seems to be relatively tame.  Bond spreads measure the difference between a certain bond and the “risk-free” government bond – higher spreads mean higher risk.  In this chart showing Chinese bond spreads, we see that while property high yield spreads have exploded on the back of the Evergrande news, spreads in all other sectors have collapsed, indicating the bond market has increased confidence the crisis can be contained in China.

That leaves us with the US Federal budget and debt limit situation as well as persistent supply chain and inflationary pressures to consider.  Regarding the former, it is certainly possible for Congress to contribute to a market accident by not raising the debt limit, but they frequently step right up to the brink before being forced to act.  Perhaps of most concern are the consistent reports from companies about lingering supply chain and cost issues.  The 3rd quarter earnings report season will give a glimpse into how much of an impact these cost pressures are having on corporate margins.  Earnings estimates have already leveled out from their strong move up earlier this year and we will be paying close attention to whether cost pressures start to reverse these estimates down. 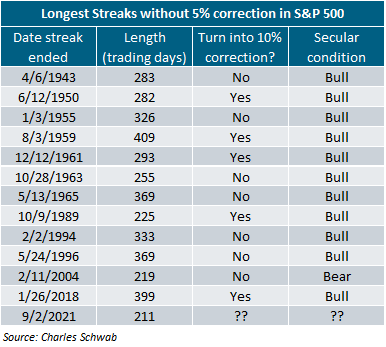 Long lists of worries are par for the course during these kinds of pullbacks, and it often helps to look at history for some perspective.  This table from Charles Schwab shows that of all the previous record market runs like the one we’ve just experienced, only one occurred during or at the start of a true “bear” market – the rest were simply market corrections during a bull market run.  Does that mean that the market can’t exhibit further weakness from here? Not necessarily, as a little less than half of the prior 5% pullbacks went on to become 10% pullbacks.   There is no shortage of catalysts that could move the market to a 10% pullback, but there are also plenty of positives that could propel it the other way – strong liquidity, an accommodative Fed, healthy corporate balance sheets for dividends and buybacks, and potential infrastructure spending.  Predicting the next 5% move in the market is most often a fool’s errand – staying invested and sticking to your long-term plan has the best history of success we know of in the business.