Market Commentary: October 2022 – Where do we go from here?

Where do we go from here?

“And where do we go from here? Which is the way that’s clear?”
– David Essex, “Rock On”

In a complex world it’s rarely the case that forward outlooks hinge on just one variable, but this just might be one of those times. Responding to inflation numbers that are running at a 40 year high, the Fed is engaged in a swift and aggressive rate-hiking cycle. It is on course to push interest rates north of 4.5% by early 2023. Will that be sufficient to both curb inflation and engineer an economic soft landing? On the flip side, will inflation remain entrenched, forcing the Fed into an even more aggressive policy response that pushes the economy into a deeper recession?

There is a smattering of evidence that suggests the Fed’s efforts are beginning to work, and the worst of inflation is behind us. U.S. small businesses are reporting seeing less price pressure, producer prices have eased, and import prices are declining. Used car prices, as measured by the Manheim Index, are almost back to normal. Supply chains have opened a bit and some retailers have reported over-stocked inventory. Previously tight labor conditions have finally started to ease as evidenced by the Job Openings and Labor Turnover (JOLTS) survey – long a favorite of Fed Chair Powell’s as being indicative of a tight labor market and upward pressure on wages. The JOLTS survey registered its second largest monthly drop on record for August.

These data are not going unnoticed. Fed Fund futures are now assigning only 12% odds (down from 14% pre-JOLTS) that the Fed Funds rate will be above 4.6% by the end of 2023. Treasury Inflation Protected Securities (TIPS), the market’s measurement of future inflation, reached a high of 3.0 – 3.6% for the 10- and 5-year timeframes back in April. Since then, forward inflation expectations have fallen sharply to around 2.3%. These measures are indicating the Fed should be done raising rates by the end of this year.

If this is the case, a recession is likely to be both shallow and brief. The problem, as history shows, is that once inflation becomes entrenched it’s much more difficult to tame.

The chart below shows that Inflation last became entrenched in the 1970s and it took three tightening cycles (Fed Funds, blue line) and three recessions (gray bars) to finally get inflation (dotted red line) under control. A closer look at the chart reveals that tightening cycles do not end with policy rates (currently 3.25%) below the inflation rate (currently 8%). 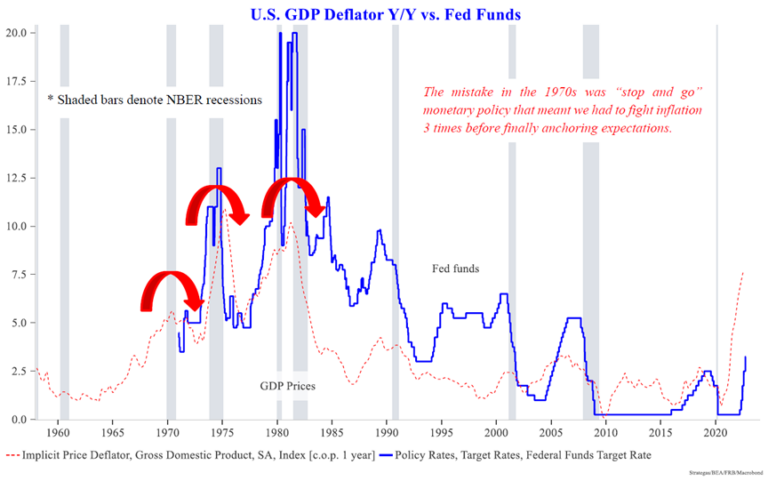 Fed Chairman Powell is fully aware that taking a “stop and go” approach by raising rates and then pivoting to an easing cycle too soon will not serve to effectively bring inflation down to the Fed’s 2% target rate. His comments in September, “We want to act aggressively now and get this job done and keep at it until it is done,” and “Without price stability, the economy does not work for anyone” appear to be alluding to this.

If policy rates must rise to a level above the inflation rate, and the Fed is committed to act aggressively until the job is done, it appears the Fed Funds rate must go higher and will remain there for longer than the markets currently expect. That brings an increased risk of a deeper and longer-lasting recession.

The uncertainty of the timing and depth of the next recession has kept investors on edge for most of the year as the S&P 500 forward price to earnings multiple (P/E) has fallen from 27 to about 17 currently as markets have sold off due to investor anxiety and high rates. Despite the drop, corporate earnings have remained remarkably resilient. The $56.87 earned in the second quarter was an all-time high for S&P 500 companies, and while estimates of $55.51 for the upcoming Q3 have come down, they are still tracking above the previous four quarter average. One looming risk to corporate earnings is the buildup in high-cost inventory brought on by pandemic-related disruptions in the supply chain. 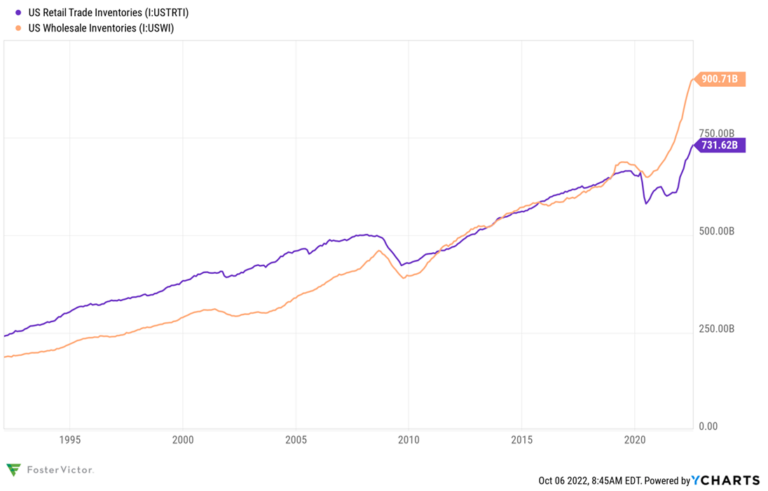 If inflation endures and the Fed is forced to hike rates north of 5%, we could expect a significant slowing of growth and demand. So far demand has remained steady, allowing companies to pass along cost increases to their customers. Should demand falter, companies may be forced to write down that inventory at an impactful cost to earnings.

On the other hand, if inflation rolls over by year-end, we can expect a flatter recovery in 2023, as opposed to V-shaped recovery in 2020. A gradual pick-up in demand would give companies the opportunity to clear excess inventories with a lesser impact on earnings, and we would expect corresponding rebounds in stock prices.

The reality is that the Federal Reserve remains engaged in an aggressive rate-hiking cycle. “Where we go from here,” will largely depend on the future path of interest rates in the Federal Reserve’s ongoing battle to rein in inflation.