The Outlook from Jackson Hole

The Federal Reserve Bank of Kansas City hosted its annual economic symposium in Jackson Hole, Wyoming on August 25, 2022. It’s a gathering of central bankers, academics, policymakers, and other influential economic thinkers. This year’s symposium was widely anticipated and covered, as will be discussed below, but first, “why Jackson Hole?”

The first symposium, “World Agricultural Trade: The Potential for Growth” was held in Kansas City, Missouri during August 1978. Later symposiums were moved to Vail and Denver, Colorado, and also explored agricultural topics. In 1982 the topic was “Monetary Policy Issues in the 1980s” – not exactly a headline grabbing topic. Then-president of the Kansas City Fed, Roger Guffey, learned that an event location with good fly fishing was the best way to ensure Fed chairman Paul Volcker would attend. However, late August was still too warm to fish for trout in Colorado, so the symposium moved to Jackson Hole, Wyoming in the northwest corner of the Tenth Federal Reserve District. It has been held there every year since, with each of Volker’s Fed successors and officials from central banks around the globe attending.

With inflation at 40-year highs, this year’s speech was of particular importance. Since the beginning of the year, the Federal Open Market Committee (“the Fed,” for our purposes) has raised its federal funds benchmark rate 4 times, and the recent 150-basis point hike in two months was the steepest increase in fed funds since Volker first graced Jackson Hole in the early 1980s.

Before the symposium, financial markets had been betting that the Fed had successfully slowed the U.S. economy and was essentially winning the war against inflation. In fact, there was even speculation that the Fed might cut interest rates next year.

This year’s Jackson Hole symposium put an end to that “best case scenario.” In his remarks from the symposium, Fed Chairman Jerome Powell warned that rates were going to stay high for a period and that history had shown the perils of lowering rates (also described as loosening policy) prematurely. He also suggested that the data was not yet complete enough to determine whether an additional rate hike would be announced at the September Fed meeting.

The stock markets took a substantial hit that day, and the two following trading days. Subsequently, various Fed governors have repeated his sentiment, if not his verbiage, in speeches underlining that Fed tightening will not be ending soon. In fact, prices on December fed funds futures contracts suggest that the markets are expecting further rate hikes of about 150 basis points before the end of the year, which translates to a range of 3.75% to 4.00%. 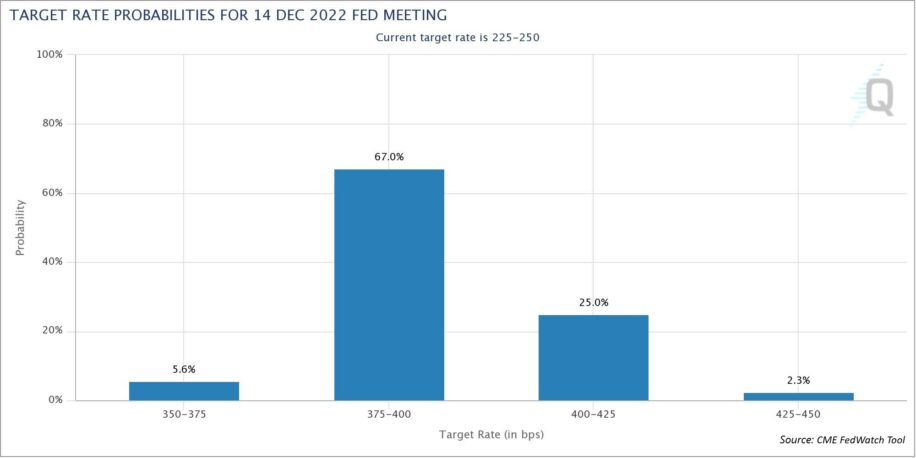 Until Tuesday 9/13/22, the stock market was digesting this analysis and reacting positively to the improving visibility of Fed policy. It is important to remember that what the markets dislike most is uncertainty. Having any measure of certainty regarding that policy, even if it involves higher interest rates in the short and mid-term, allows investors to better price assets and thereby manage risk. Yesterday we saw the impact of uncertainty hit hard when the CPI report came in hotter than consensus. The “core CPI” number, which excludes food & energy, was up 6.3% year over year, versus up 5.9% in July. Commodity and energy prices continue to soften, but the “stickier” prices like housing and medical continue to remain elevated and will take longer to reflect in the data. Until they do, we can expect the Fed to keep up their hawkish rhetoric on rates into the near future. The market was caught offsides on Tuesday’s report as it likely expected a steady march down in the inflation rate. This report pushes those expectations out, and the market is reacting accordingly. An important data point to keep in mind is that even with Tuesday’s market movement down, the S&P 500 was still above where it was trading just 7 days prior on September 6th. Markets will likely continue to remain volatile in the short term, but we do anticipate that inflation should trend downwards eventually.

Although it might take longer than originally expected to begin to affect inflation, and interest rates will probably continue to rise until the CPI falls for a couple of months, the markets seem to show that the beginning of the end of the process is here. Since markets are always looking forward, this is extremely constructive for the next 12-18 months. The “outlook from Jackson Hole” is that the Fed is administering some nasty medicine to cure inflation, but that we’ve already swallowed a good portion of the dose.